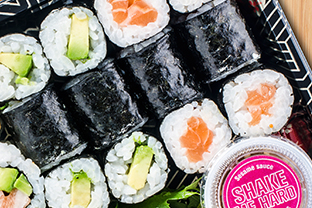 Sushi delivery aficionados should be rather familiar with maki rolls, especially those living in the West. For those not in the know, maki or makizushi is basically the most common type of sushi served outside Japan. It consists of a variety of ingredients including rice and crispy seaweed and is often cylindrical in shape. The roll is traditionally prepared with the use of a bamboo mat, known as a makisu and can be wrapped in nori, omelette, cucumber, soy paper and shiso leaves. And like most Japanese cuisine, the dish has a number of delicious variations. Here’s a run-down of the most popular.

Futomaki
The Futomaki roll usually features nori as its wrap and is cylindrical in shape. There are normally two, three or four fillings such as bamboo shoots, kampyo gourd and cucumber. Non-vegetarian ingredients can include omelette, fish roe, whitefish flakes and chopped tuna. Futomaki was traditionally eaten during the Setsubun Festival in the Kansai region of Japan, although its consumption has since spread across Japan.

Hosomaki
Hosomaki is a scaled down sushi roll and consists of a cylindrical nori wrap with a single filling: cucumber, sliced carrots, kanpyo or avocado. It is usually intended as a palate-cleaner when eating raw fish with other kinds of dishes and is rather effective at cleansing the taste-buds of fishy flavours so that the other dishes can be properly appreciated.

Teakkamaki
This is a variation of the Hosomaki Roll and uses raw tuna as its filling. It originated from gambling dens known as tekkaba and has become an extremely popular, light snack in Japan.

Negitoromaki
This too is similar to the Hosomaki but instead comprises of scallion (negi) and chopped tuna (toro) as the main fillings. There’s also a Westernised version known as Tsunamayomaki that uses mayonnaise with canned tuna.

Ehōmaki
Ehomaki is more elaborate than its counterparts and is composed of up to seven different ingredients such as egg, eel, shiitake mushrooms and Kanpyo egg. Numerous other fillings are also used, especially with Westernised versions.  Ehomaki is also eaten during the Setsubun Festival and like Futomaki, is now consumed on a more general basis in Japan.

Temaki
One of the largest sushi rolls, the Temaki consists of a cone-shaped piece of nori with a large dollop of ingredients which spill out of the wider end. Various types of raw fish can be used as fillings including tuna and salmon. It usually spans around 4 inches and is eaten with the fingers – chopsticks are next to useless given the rolls size! Etiquette demands that the Temaki be eaten quickly, before the nori cone absorbs the filling’s moisture and becomes soggy. Thus, Japanese takeaway versions are carefully wrapped in plastic film to protect against this.

The above rolls are the most common types of handmade sushi in London and indeed the West. The larger ones should be eaten by hand for the sake of practicality. However, try using chopsticks for the more diminutive versions. Remember to visit our main site, if you’d like any of these delicious maki rolls delivered straight to your door.