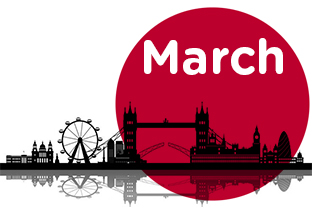 Calling all you Japanophiles out there. If eating buckets full of sushi delivery does not satiate your craving for Japanese culture, here are some of the best Japan-inpsired events coming to a venue near you this March (2015).

Okay, so the 24th of February is not strictly March, but February is a famously short month as you no doubt know, and this one was simply too good to miss out.

Dr Barak Kushner, author or Men to Devils, Devils to Men: Japanese War Crimes and Chinese Justice, comes to London to discuss the themes incorporated within this fascinating book.

Between 1931 and 1945, the Japanese Army committed numerous atrocities during its ruthless campaign in China. However, when the war finished and the Chinese emerged victorious with the allies, rather than exacting violent retribution for these crimes, China turned to legal and diplomatic means to seek a resolution.

In this talk, Dr Kushner focuses on the trials of, and policies towards these war criminals, and explains how the Chinese and Japanese camps both vied to prove the justness of their cause to the world.

The Japanese/English Meetup is held on the second Tuesday of each month at 7pm, upstairs in the Slug and Lettuce on Hanover Street (near Oxford Circus). This is a relaxed and informal way for Japanese people learning English, and English people who are fascinated by Japanese culture to meet up and practice their language skills.

For more information or to confirm your attendance, just pop along to the official London Japanese Language Meetup webpage: http://www.meetup.com/japanese-34/.

2015 marks the 50th anniversary of the publication of The Three Cornered World, the award winning translation of Natsume Soskei’s Kusamakura. Two years after the translation was written, it was read by Glenn Gould, who, at the time, was the world’s most famous pianist.

The Three Cornered World went on to become an obsession for the last 15 years of Gould’s life. He subsequently went on to buy every English translation of Soseki’s work he could find. But what was it that so gripped Gould’s interest?

In this talk, Damian Flanagan explores the fascinating link between Gould, Soseki and Johann Sebastian Bach’s Goldberg variations, which Gould performed a passionate rendition of towards the end of his life.

The talk runs from 6pm-7pm and touches upon three geniuses in an hour. You can’t ask much more than that!

And, if you’re still hungry for a little more Japanese culture, why not head to your local sushi takeaway on the way home?